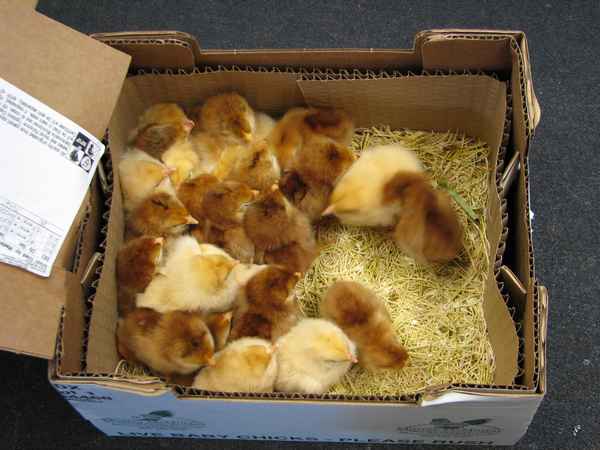 A 7:30 a.m. phone call let me know to come to the post office to pick up my box of chicks.

Shiloh checking out the new additions.

That’s pretty much all there is to it. I regularly monitor their progress and make sure that the heat is right (judged by their behavior – not by a thermometer), keep the floor clean, add clean water and food as needed. I keep a piece of hardware cloth on the top opening to keep them from somehow fluttering out and to “keep the dog honest”.

Followup – Added one month later (February 28):
This is the most successful batch of chicks I have had yet. I only lost one – and that was not to a health issue. She somehow escaped from the “nursery pen”. The dog was doing his job and kept barking to let us know, but we figured he was just being an idiot so we ignored him. Since the chick couldn’t get back in with the rest of the checks, she decided to go into the ark with the rooster and the two grown hens. I locked them in at night and didn’t notice the chick in with them. In the morning, I found the dead chick when I went to let them out. I assume that she made it through the night OK since I would have seen her when I let them out. In the morning, the hens attacked and killed her. The rooster has never shown any aggression toward the chicks through the fence, but the two hens will peck at the chicks that get too close to the fence. Jealousy, I suppose.

Mama Hen and the Brood

On January 1, we put 12 fertile eggs under a broody Buff Orphington hen. Twenty-one days later, we had seven baby chicks. The chicks are (I hope) all Rhode Island Reds (RIR). We have a RIR rooster, and the RIR eggs are shaped a bit differently than the Buff Orpington eggs, so I hope that what we have is pure Rhode Island Red chicks. We’ll see as they mature.

One thing that I’ve noticed is that the survival rate of chicks hatched and raised by a hen is much better than with an incubator. The incubator yields a bit better number of hatched chicks than the hen, but the mortality rate during the first week or so is much higher. So far, we have never lost a single chick that was hatched and raised by a hen.

To the right is the Roll-Away nest box described in a previous post. It makes a great hatching nest with the partition removed and sitting level. The feeder and water jar have since been moved on top of a concrete paver to keep the hen from scratching dirt into them. 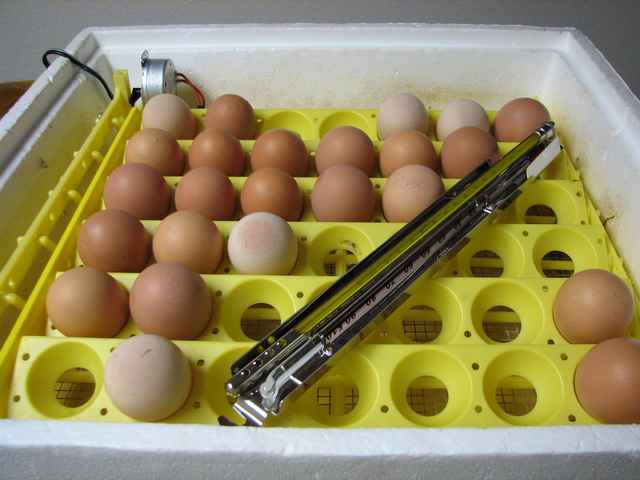 This batch of Rhode Island Red eggs is due to hatch on April 9. This is the first batch of eggs from these hens and rooster, so we’ll see what happens. The rooster has an interesting sounding crow – it is more like that of a small bantam rooster. I hope that is an inherited trait!

Update:
This batch of eggs has been scrapped due to my own negligence. We had a power outage for about 12 hours several days ago. I cranked up the generator and ran the incubator (as well as the water pump and the office), but when I plugged the incubator back into the wall outlet, I plugged in the incubator but not the egg rotator. What I thought was the plug for the rotator was the plug for the seed starting heating mat. They might have still successfully hatched, but if only a few hatched, I didn’t want to try mixing the chicks after starting a second batch. The new batch will probably be started in about a week.

Having chicks hatched the “natural way” is, of course, the best way to go. I previously had some broody Buff Orpingtons, but this current group has shown absolutely no interest in setting on the eggs – a major disappointment for me.